Codewords are like crossword puzzles – but have no clues! Instead, every letter of the alphabet has been replaced by a number, the same number representing the same letter throughout the puzzle.
All you have to do is decide which letter is represented by which number! To start you off, we reveal the codes for two or three letters (sometimes :-)).

Hours of fun with our Cipher crosswords, a word puzzles with hidden quote!

The Cipher crosswords puzzles, is a fun word puzzles, invented in Germany in the 19th century.

English-language cipher crosswords are nearly always programmatic (all letters of the alphabet appear in the solution). As these puzzles are closer to codes than quizzes, they require a different skill set; many basic cryptographic techniques, such as determining likely vowels, are key to solving these. Given their programmatic, a frequent start point is locating where ‘Q’ and ‘U’ must appear.
The Cryptograms are available in three different sizes:

Other functionality of this game are:

– After each Chiper Games a famous quote (aphorism) will be unveiled.
– You can at any time check, by a button, the correctness of the words.
– The game requires no installation and can be played offline.
– Games can be saved and resumed at any time.
– A new Famous quote every day

The total of the code-word puzzles offered is 185.

If you want to play with many other Encrypted crosswords, there is a professional version without advertisements and with the possibility to download new codewords regularly. 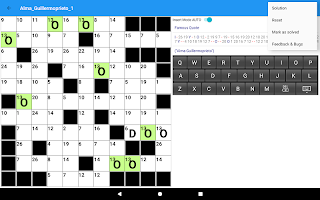 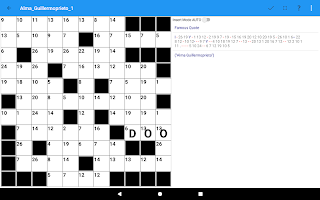 Ghost is simple chat bot app. You write something, Ghost...

Do you enjoy word puzzle games? Here comes the perfect...

With our Number Fill in puzzle, you will have fun...

Our "magazine like" Fill in crosswords (or Kriss-Kross fill it...